Thank You!! I used your assets for my game on:
Play Store: https://play.google.com/store/apps/details?id=com.XwinStudio.ShootingStar

Check it out if you want!!
Thanks for sharing your art, your are the best <3

Thank you for sharing the link, it looks great!! Glad it's been useful! :D

Just wanted to throw in a few more suggestions for your icon set, if you are still interested in working on it!

But first let me ask you this - are you familiar with the Github? If so, would you be interested in creating a github repository with the icons where people could get your icons from, and also create pull requests with their own additions and modifications? I personally tried to extend your icon set, but I suck big time at drawing. Mb somebody else will do better and help you expend it!

As for ideas, here are a few:

Also, I really liked new potion bottles, they are great! Just wish there were filled versions of them of different colors, and if with the '+' signs and sparkles - even better!

One last thing - the sizes of the canvas for different versions are a little bit off - they are 512x867, and 867 can't be divided by 32, which makes some programs throw errors. Also, it might be helpful if you would, in addition, include a folder with each item as a separate file - might help folks using different texture packers. None of these are critical ofc, good developer can do it on their own, but if you already have it and its not a big trouble to include it, I think that might be appreciated. 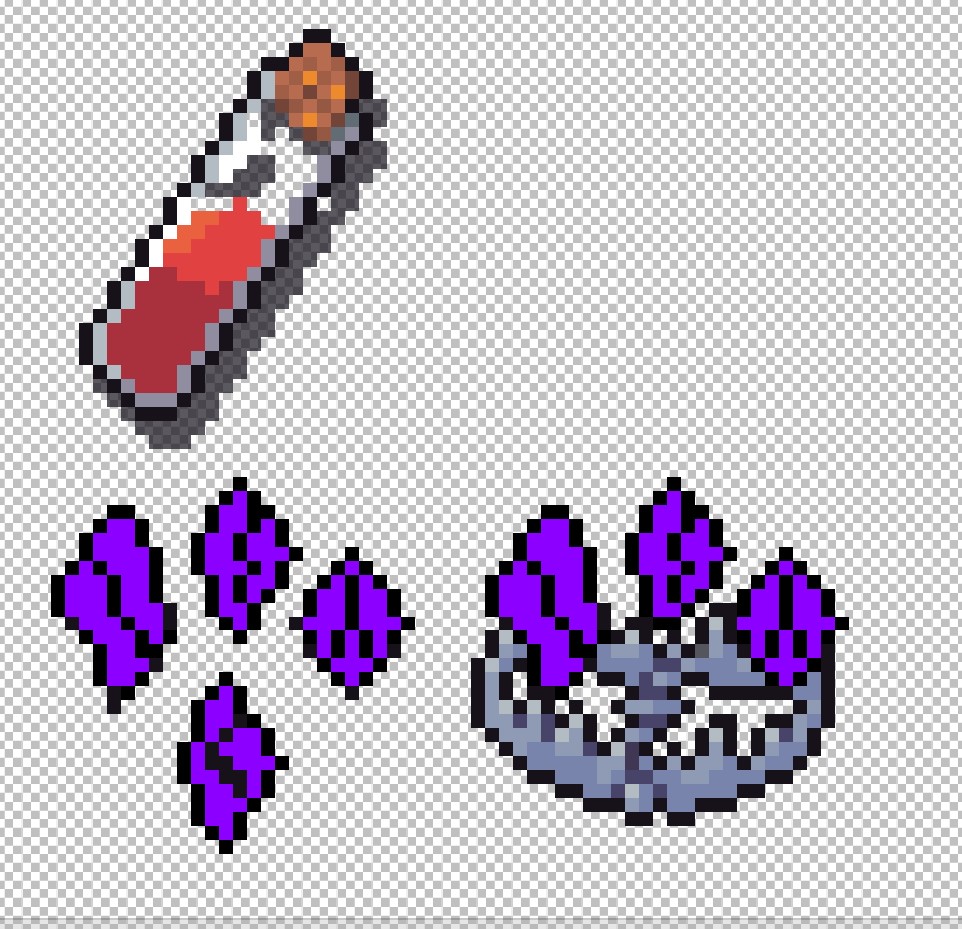 Thanks for the feedback Nightspeller. Your potion doesn't look bad, just needs a couple pixels adding in the shadow and the liquid should have  a steady line on top. and I think the trap would look ok with a less vibrant purple and the middle line a darker purple.

I will probably do one last update, which will include edits from jclaws. I don't know if I'll be able to do all of your suggestions but I'll include some of them for sure.

I'm familiar with Github, I'll definitely consider that once I've made the final update.

Remember my icons are basically edited icons from game-icons.net, so you can easily make edits by shrinking 'em down and working on top of them. And this is the palette used: https://lospec.com/palette-list/mail-24 (with some small additions) - I hope this helps!

I really love these icons! Exactly what I needed. A shame you give it away for free, these could sell for a buck or 2. If you got a donation link from itch you share it. I see many 16x16 icon packs on itch, which are also very very good though, but just a few 32x32, including this one. And that is a shame as not everyone uses 16x16 dimensions, including me. I bought a tileset pack from itch just now whose tiles are 32x32 so I needed an icon pack to match it. This one is perfect.

Hey man thank you for the comment. I enabled the donation option, didn't think anyone would actually use it so didn't enable it previously.

I wasn't sure whether to do 32x32 but it seems to have been quite popular so maybe my future packs should be that size too. Best of luck with your project  👍

Thanks a lot! I was about to donate but I see no option for credit card. This option was available when I purchased the other packs. Can you add it somehow? I don't want to go for PayPal again as I had very negative experiences with them in the past. Just using a creditcard seems to work just fine so far. :)

Ah I can't set up Stripe just now, you have to mess around with tax info etc. In the future I'll have all that ready to go, sorry for the inconvenience. Anyway don't worry about it, take care!

Hey I'm glad. Cool, I sent a DM over on Twitter.

Hi Shikashi!  These icons are amazing!  I have yet to incorporate them in an RPG game, but I created a program that lets me easily view each fantasy icon on each spritesheet.  I hope you like it.  Below is a link to that program. Thank you!

Wow very nice job on the icon viewer!! I've added this to the description above so others can access it easily. Great tool for people to swap the backs and test them out, thanks for sharing Qi!

Hi! I used your assets in a Tabletop Simulator Workshop mod to make it available to other creators!

Hey that's really cool, I've started playing tabletop sim recently. Nice one, gave it a thumbs up and a sub!

Omg Shikashi! Very nice update, love it! I see a lot of things I was suggesting are there - can't believe you actually made it, that's so awesome! Will be following you on twitter too now, keep up the great work!

Sorry there was such a delay, I hope its useful to you! And thank you very much for the follow!! :D

Thanks very much for these,and Thank for sharing ;)

Thank you for your help. My name is loopk.
I have three questions about the terms of use of Shikashi's Fantasy Icons.

1. Can I use Shikashi's Fantasy Icons to produce adult games for electronic sales?

2. Do you want to edit some materials of Shikashi's Fantasy Icons with paint software (use copy and paste, eraser, etc.) and combine layers with other image files or create new image files?

3.Is it OK to exchange RMMV project files containing Shikashi's Fantasy Icons to request a crowdsourcing service user or acquaintance for game production?

1. Yes that's no problem. The icons can be used for whatever you want.

2. Yes you can edit the icons and do what you like with them.

Good luck on your project.

>1. Yes that's no problem. The icons can be used for whatever you want.

>2. Yes you can edit the icons and do what you like with them.

>Good luck on your project.

Thank you, really handy as I can't draw to save myself :D

Thank you for this amazing icon set. I'm going to use it in my opensource project. Tell me if I need to mention you somewhere.

Hey Doc, I hope it's useful to you. If you want to add credit just list "Shikashi" and "game-icons.net"!

Thank you, for now i'm a student and it's very useful :)

You're welcome. They can be used for business too!

Thanks very much for these, they have really added flavour to Heartland Frontier and I  will be sure to add any future art you make to the game.

Hey I'm glad to hear it. There'll be an icon update soon, if you have any requests just let me know. Best of luck with Heartland, it looks pretty interesting!

Yessss!  Thank you so much for sharing!

Hope it's useful to you!

Exactly the style I was looking for to use in my project! Thank you very much for sharing this for free!

You're welcome! Good luck with your project :)

Thank you very much for the amazing icon set, I really love it!

And just wondering if there are any more of it, like an extensions for that set or something, free or paid? Thanks!

Hi Night, glad to hear it! There aren't any extensions currently, but let me know what kind of thing you're looking for. I plan to work on other iconsets and asset packs in the future so it's helpful to know what people want to see. Otherwise I can do custom commissions in the same style if that's something you're interested in. Thanks for the comment!

Thanks you for the reply!

Unfortunately I am not a real game developer - I just write a little some open source, in my free time, without any financial support or expectations to get it. That's why I can't afford to commission you for my project, even though I would love to!..

As for suggestions, here is what I would love to see in the set:

I probably could come up with more, but don't want to look over-zealous (or am I already? xD)

Thanks for the list, and no worries. I'll add these to the pack when I've finished with my current commissions. If you have more suggestions, please let me know! I might not be able to do them all if there's too many, but most you've listed sound simple enough. The DnD parameters might be a bit harder as they're a bit vague to make symbols for, int, wis, cha, for example.

Hello Shikashi,
My game "Escape from the death castle" uses your icons and the game will unlock tomorrow.
I want to send you a steam key to express my gratitude. If you want, please contact me (jinthwang@qq.com).Thanks♪(･ω･)ﾉ

Sorry about that, I've resent it with a different email. Having site problems currently

this is a gorgeous page btw

Haha not this time, but I'll release some paid packs in the future. Happy New Year! :)

Thank you very much! :D

Soon...soon... will you be able to make GIFs for the weapons?

What kind of thing are you looking for?

where do I put the content?Im new to this stuff do I put them in the icons folder?where game weapons icons are?or somewere else?

I found out how :D

Your icons are very cool keep up the good work!

Glad you worked it out, and thanks, will do!

Thanks for making these awesome sprites ! I would love to use some of them for my little project 😄

Glad you like them! Link your project here when you're done :)

There is only this one for now, but I will make more packs like this in the future.

Thank you, I appreciate it!

They are amazing :D
Keep up the good work :)

You're welcome, I'd love to see what you put together!

Thanks,   what program did you do this?

I made them in Photoshop.

Someone linked your assets to me as an option to use for GMTK's game jam :D . Though I partnered with an artist, with not enough time I ended up using a few of your icons for it! Thank you, you're a lifesaver.

Glad it helped! Best of luck!!

Hi! I used your crossbow and spellbook icons for a project that I just called finished. Thanks so much for making free assets for new game devs :) Check out Sword Dude here: https://shikashiassets.itch.io/

Wow, nice job! You're very welcome, it's great seeing them in action. I'll be releasing more free assets in the near future too so keep an eye out :D

will a 16x16 pack be available at some point the future ?

Not for this pack, but I will do other 16x16 icon packs in the future.

can I use this in a game that i will sell on stores ? I won't sell the assets i will the game that I will made using the assets.

Yes, no problem! All I ask is you credit "Shikashi" and "game-icons.net". Thanks!

Hello, i adore this art.

How can I use it for commercial purposes?

Hey, thanks! Just list "Shikashi" and "game-icons.net" in credits, that's all!

Thanks! Hope it's useful to you!

Thank you! What a fantastic icon sets!

Many of these icons were based on designs over at game-icons.net which are CC BY 3.0.

I want to ask a few things about this pack. Can you please contact me at omergunduz123@hotmail.com